The Old Woman on the Street 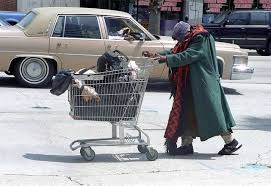 I sat at a table on the restaurant’s patio, sipping my mocha, pen in hand, observing the rushing crowd when I saw her. How could I not? For she was the only one not in a hurry to be somewhere but was dawdling in each moment.

The old woman was an odd-looking sort with her holey tennis shoes, mismatched socks, and long flowery skirt, which was worn thin and didn’t match the bright pink sleeveless blouse. Her exposed skin was dark, and layers of fat rolled about her thick waist, and her flabby upper arms jiggled when she moved. But it was her face that held my attention with its leathery wrinkles, chapped lips, toothless grin, and large brown eyes, which imparted a sense of grace and seasoned wisdom.

The woman pushed a shopping cart down the sidewalk filled with odds and ends that other people threw away as junk. She ignored the stares and answered sarcastic taunts with a friendly wave while humming Amazing Grace. The old woman shuffled forward. Her eyes darted back and forth, looking for discarded items and, when found, would stoop to pick it up, examining the treasure. Excitedly she jumped up and down while holding it with both hands. She was smacking her gums together rapidly in glee, almost like she was shouting, before placing it gently into the shopping cart and shuffling on.

The old woman was in a world of her own where few were invited in. A world I was privileged to step into for only a few moments.