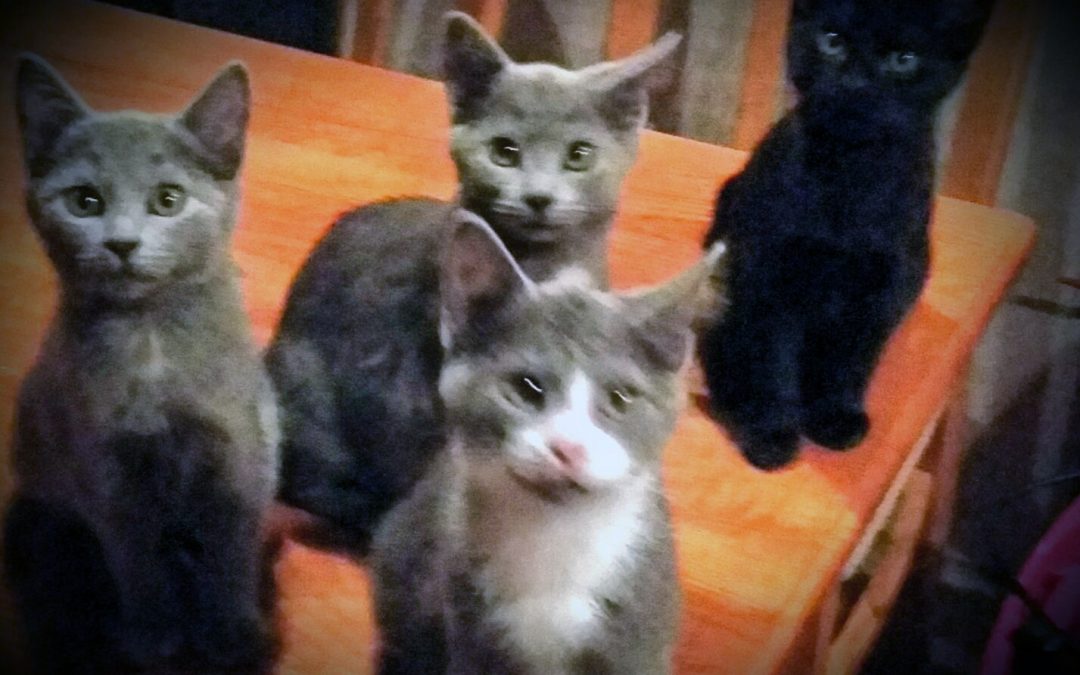 In October 2016, I took a walk from the top of the hill down my driveway. I had been living on my little farm for ten months now and I love it. The peacefulness broken only by…. what? meow’s?

I looked frantically around and out of the weeds comes a small grey kitten. As I go towards it, another one comes out who was grey with white on her paws and chin. I pick the two up when I hear another meow coming from the other side of the driveway and another grey kitten appears. I struggle to hold all three kittens in my arms and head back to my house. It is then I realized I am being followed by a too skinny black cat. I assume it is Mama.

I go inside and grab lunch meat, milk and two bowls. I pour a bowl of milk for the kittens and I put a bowl under the back of my car for mama who still wouldn’t come near me. After the kittens finish the milk, I place lunch meat in front of them. The poor kitties were starving and growling to protect the food they had. I took the kittens inside but mama cat refused to come near although she drank all the milk.

The next day I went to the store and got cat supplies and food. I saw Mama again but she still did not come close. I decided to walk down to the driveway wondering if there were any more kittens. Indeed, there was. One black kitten came out of the weeds. I took her to my home and while she was eating, I noticed a parasite had embedded itself on the shoulder.

I went outside and called for Mama but she wouldn’t come near. I took the black kitten to the vet where he had to perform surgery to remove the parasite. When I came home and put the kitten inside, I again sat on the porch and called for mama. Surprisingly, she ran out of the woods and jumped in my lap.

And that is how I got adopted by Ms. Kit Kat, Sox, Ox, This and That and how the adventures began.